The Emerald Triangle Project is well on its way to completion. The project includes the renovation of three cultural facilities in uptown Greenwood. Renovations to the Federal Building were the first phase of the process. Work began in mid-2004 and was completed in early 2006. The Arts Council of Greenwood County has leased the building for twenty years for use as an arts center for this community. The Arts Council moved their offices to the building in February of 2006 and the Grand Opening ceremonies were held in April. 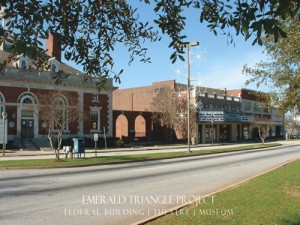 The second phase of the project involves renovations to the Greenwood Community Theatre. Upon completion, the theatre will provide a state-of-the-art performance venue for this community. The theatre will be the home of our community players but will also serve as a choice for films, lectures, presentations, and as a performance stage for a variety of other acts. Expected completion is early 2007.

The final phase of this project will be stabilization of The Museum. This facility has a number of problems which limit public access to the entire collection. This work should begin in early 2007. In the meantime, The Museum will update and reorganize their exhibits.

To make a donation to the Emerald Triangle Project, please contact the Arts Council or send in your donation marked ETP. This is a tax-deductible donation.